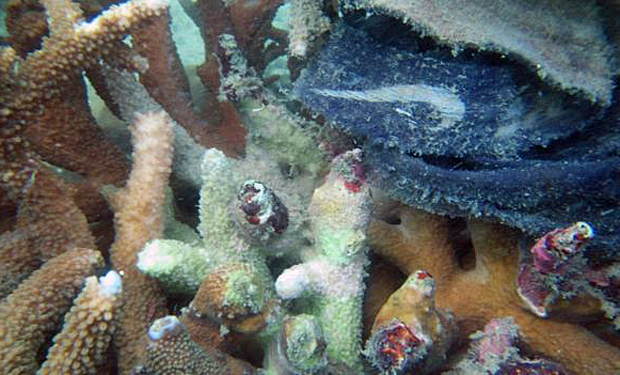 Asia-Pacific Survey: A third of coral reefs entangled with plastic

From the BBC: As published in the journal Science, international researchers surveyed more than 150 reefs from four countries in the Asia-Pacific region between 2011 and 2014.

More than 11 billion items of plastic were found on a third of coral reefs surveyed in the Asia-Pacific region. This figure is predicted to increase to more than 15 billion by 2025.

Plastic raises by 20-fold the risk of disease outbreaks on coral reefs, according to research. Plastic bags, bottles and rice sacks were among the items found.

"Plastic is one of the biggest threats in the ocean at the moment, I would say, apart from climate change," said Dr Joleah Lamb of Cornell University in Ithaca, US.

"It's sad how many pieces of plastic there are in the coral reefs ... if we can start targeting those big polluters of plastic, hopefully we can start reducing the amount that is going on to these reefs."

It's thought that plastic allows diseases that prey on the marine invertebrates that make-up coral reefs to flourish. Branching or finger-like forms of corals are most likely to get entangled in plastic debris.

These are important habitats for fish and fisheries, the scientists say.

"A lot of times we come across big rice sacks or draping plastic bags," said Dr Lamb, who led the study. "What we do find is these corals with a lot of complexity like branches and finger-like corals will become eight times more likely to be entangled in these types of plastics."

Plastic was found on one-third of the coral reefs surveyed. Reefs near Indonesia were loaded with most plastic, while Australian reefs showed the lowest concentration. Thailand and Myanmar were in the middle.

"The country's estimated amount of mismanaged plastics - so the way they deal with their plastic waste - was a strong predictor of how much we would see on the reef," said Dr Lamb.

Coral reefs face many threats. Coral bleaching is caused by unusually warm water. Coral polyps loose algae from their tissues, which drains them of their colour. They may recover if temperature changes are reversed in a reasonably short time, but this process can take many years.

In the case of diseases, organisms attack coral, leading to likely death. Previous research has found that plastic debris can stress coral through blocking out light and oxygen, thereby giving pathogens a chance to take hold.

Based on projections of plastic waste going into the ocean, the researchers suggest that the number of plastic items snagged on Asia-Pacific corals may increase from 11.1 billion to 15.7 billion plastic items by 2025.

An estimated 4.8 to 12.7 million tonnes of plastic waste enter the ocean in a single year. More than three-quarters of this plastic is thought to originate on land.