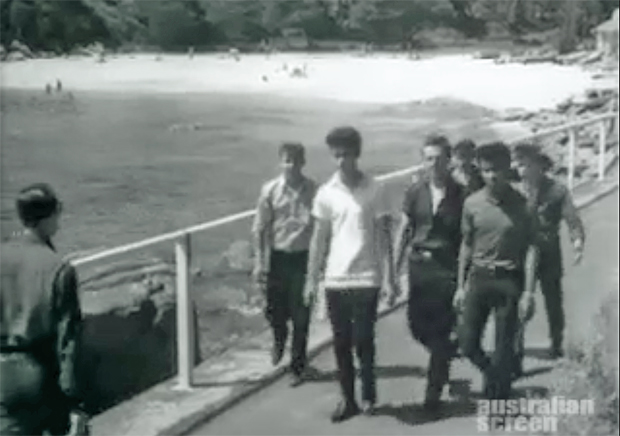 “All Quiet on the Surfie-Rocker Front” – cinema newsreel from 1963

Dug from deep in the dark web by PLB’s archive detective Ian Lording via the government’s own Australian Screen NFSA Website – a fleeting one-minute look at a time when gangs of surfies and rockers regularly beat the crap out of each other . . . or sometimes maybe just walked by and snarled a bit.

A short newsreel item from 1963, outlining police efforts to curb gang violence between suburban ‘rockers’ and surfers at Manly Beach.

The use of the word ‘invaders’ gives a clear sense of where the editorial sentiment lies in this newsreel, but it’s a shallow description. To some extent, the surf craze invaded territory owned by the rockers, rather than the other way round.

As far as they were concerned, the rockers were older, tougher, cooler and opposed to everything that surf music stood for. The rockers were firmly working class, and the weekends were a chance to escape the rules of home, by going to the beaches and generating some excitement.

There was a tough element in the groups, fuelled partly by the spirit of rock‘n’roll rebellion. Surfers in the coastal suburbs were not necessarily any less tough, and they were interested in some of the same things: girls, fun, getting drunk and fighting. The clashes were more or less inevitable in that sense, and they came to a head in Manly in 1963.

One year later in the UK, there were similar clashes between ‘mods’ and ‘rockers’ in the Brighton riots – another seaside town, with no surfers to speak of. In a sense the fighting at Manly was more about turf than surf.

The newsreel covers this story with extraordinary economy. There are only nine shots in this sequence, and it lasts just 55 seconds, but it manages to give a strong flavour of the times, and a clear bias.

We see the blond, clean-cut look of the surfers, contrasted with the dark-haired, swarthy rockers, who walk past the camera with glaring eyes. Clearly, the newsreel cameras were hoping for more action than they got. There is no violence.

In a very real sense what the newsreel was trying to do was to keep up with television, which was able to provide more immediate images and news by 1963.