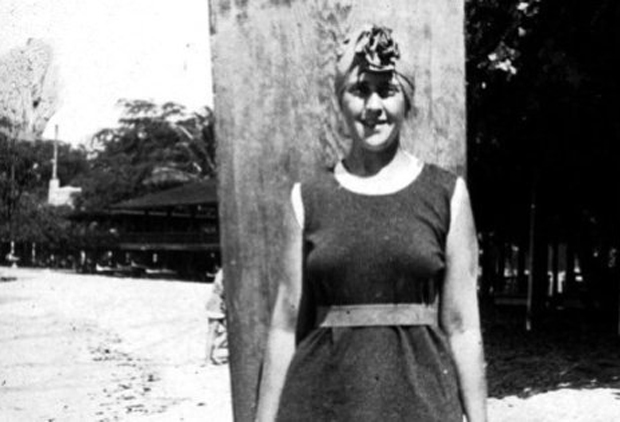 Agatha Christie with her board in Cape Town, South Africa, 1922. She was among Britain’s first ‘stand-up’ surfers, research has revealed. Photograph: Museum of British Surfing/SWNS.com

From the Never Knew That Department: Hercule Poirot never risked his grey cells or his impeccably waxed moustache by attempting to hang ten. Nor did Jane Marple ever strap a board to the roof of a Kombi and thunder out of St Mary Mead in search of the perfect tube. Their enigmatic creator, though, was something of a pioneering and diehard wave-rider.

At a time when many of her contemporaries were chugging cocktails in Blighty, Agatha Christie was paddling out from beaches in Cape Town and Honolulu to earn her surfing stripes.

Research by Pete Robinson, founder of the Devon-based Museum of British Surfing, suggests Christie and her first husband, Archie, may been among the first Britons to learn how to surf standing up.

The thriller writer's surfing safari began after the first world war when Archie was offered the job of helping to organise a world tour to promote the British Empire Exhibition, which was to be held in London in 1924.

In January 1922, the couple left their young daughter in the care of Agatha's mother and sister. They arrived in South Africa in early February and were soon introduced to prone surfboard riding on Muizenberg beach.

Christie noted her observations of the sport – and reactions to the odd wipeout – at the time, writing: "The surf boards in South Africa were made of light, thin wood, easy to carry, and one soon got the knack of coming in on the waves.

"It was occasionally painful as you took a nosedive down into the sand, but on the whole it was an easy sport and great fun."

They continued their tour through Australia and New Zealand before hitting Honolulu in August. It was at Waikiki that the Christies learned how to surf standing up – and how to deal with sunburn and sharp coral.

To protect their feet, they bought soft leather boots and Agatha swapped her silky bathing outfit for something a little more practical but equally stylish: "A wonderful, skimpy emerald green wool bathing dress, which was the joy of my life, and in which I thought I looked remarkably well!"

Agatha, who stayed in Hawaii until October that year, wrote in her autobiography: "I learned to become expert – or at any rate expert from the European point of view – the moment of complete triumph on the day that I kept my balance and came right into shore standing upright on my board!"

According to Robinson the entries reveal a new aspect of Christie's life as someone with a "passion for the sea" and "a sporting young woman".

She was, however, neither the first — not the least likely — high-profile British exponent of the sport.

"In the early 1920s very few British people were surfing and the only one we know about earlier than her, standing up, was Prince Edward," he add