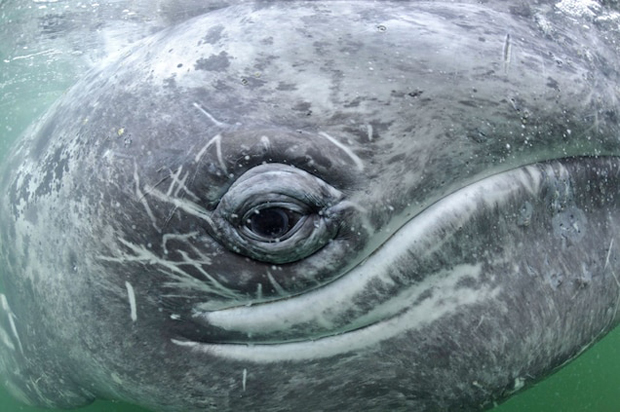 The eye of a gray whale. 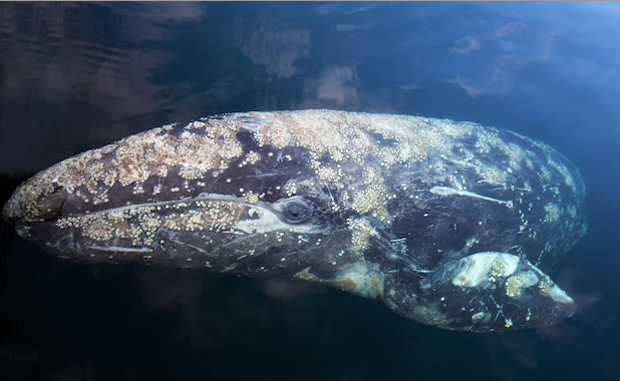 A gray whale swims through Alaska's Prince William Sound. The species is typically found in the Pacific, though there have been recent sightings in the Atlantic.

A gray whale and her calf interact with a human in the waters of San Ignacio. ALL PHOTOS BY NATIONAL GEOGRAPHIC 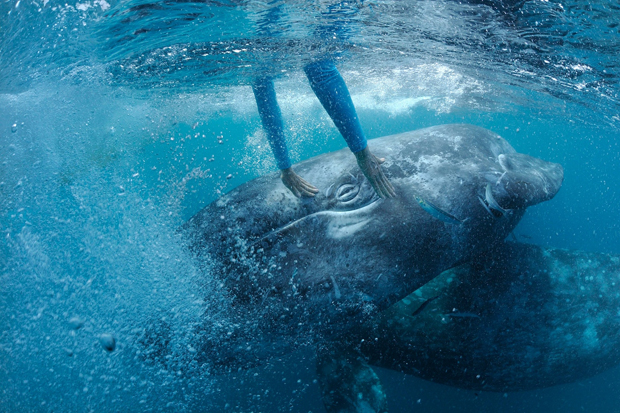 A gray whale swam halfway across the world, setting a new record

From the Amazing Sea Stories file: The 40-foot male travelled from the North Pacific to Namibia, the first sighting of the species in the Southern Hemisphere.

A gray whale has swum the longest distance ever recorded in a marine vertebrate—more than 16,700 miles—over halfway around the world.

The male cetacean, spotted off Namibia in 2013, is the first gray whale ever recorded in the Southern Hemisphere.

But it took several years of genetic research to confirm the whale originated in the North Pacific, according to a study published today in the journal Biology Letters.

Eastern grays migrate from the seas around Alaska and Russia to breeding grounds in Baja California. Much less is known about western gray whale breeding grounds, but they’ve been recorded as feeding around eastern Russia.

When study co-author Simon Elwen, a zoologist at the University of Stellenbosch, South Africa, first heard of the 2013 sighting, “I was a bit dismissive,” he says. “It’s like someone saying they saw a polar bear in Paris—technically it could get there, but it just doesn’t seem very realistic.”

Photos confirmed it was indeed a gray whale, around 40 feet long. The animal stayed in Walvis Bay for two months, possibly because it was malnourished, allowing Elwen and Tess Gridley, also a University of Stellenbosch zoologist, to collect minimally invasive DNA samples.

Gray takes the record from a leatherback

The gray whale’s incredible feat - which trumps the previous record-holder, a leatherback turtle tracked for 12,774 miles across the Pacific - has also left the scientists with questions: Namely, why would a gray whale go so far from home?

The authors speculate the rapid decline in sea ice in the Arctic due to climate change may be allowing gray whales to explore - or get lost in - new habitats, though there’s not enough data to draw any conclusions.

For a whale that usually migrates around 5,000 miles, “it's very expensive to travel so far,” says co-author Rus Hoelzel, an evolutionary biologist at Durham University in the U.K and a National Geographic Explorer.

“It does make you wonder why they would do that, under what circumstances? For those reasons, it's scientifically interesting.”

Digging into the genes

For their research, Gridley and Elwen teamed up with Hoelzel and Durham University evolutionary biologist Fatih Sarigol to compare the whale’s genomes with other gray whale genomes stored in the U.S. National Center for Biotechnology Information, a digital repository for genomes of over a thousand organisms.

They wanted to rule out a possibility that the whale came from an unknown Atlantic population; there’s fossil evidence of gray whales in the Atlantic, and two gray whale have been sighted in the North Atlantic and Mediterranean in recent years.

“There are cetacean species that we know very little about because they're just so hard to encounter,” says Hoelzel. “But in the case of the gray whale, they do tend to be coastal and fairly recognizable, so the idea that there's this hidden population in the Atlantic is probably not very likely.”

It turned out that the Namibian whale’s genes did match with those of North Pacific gray whales stored in the biotechnology database. Surprisingly, the researchers say, the closest fit was with the endangered western population.

Next, the team analyzed possible routes the marine mammal could have taken, considering it most feasible that the animal journeyed around Canada through the Northwest Passage. Other options - such as circumnavigating South America or swimming through the Indian Ocean - are less likely, in part due to lack of reported sightings, and also because gray whales tend to feed in shallow water, making long trips over open ocean more difficult.

However, Sue Moore, a research scientist specializing in Pacific marine mammals at the University of Washington in Seattle, believes the Indian Ocean crossing is most likely, as it’s the shortest and least complicated route.

“That said … this whale was likely a vagrant,” adds Moore, who wasn’t involved in the research, suggesting that this was not a migration with a clear destination in mind.

“But,” she says, “it does give us something very interesting to contemplate regarding the resilience of this species.”